Starter- Expanded noun phrases. Choose an activity that would best suit you!

To we're going to use our ideas about our character's appearance, personality and hobbies to create expanded noun phrases that meet year 5 standards.

Here are my ideas about Malfoy: 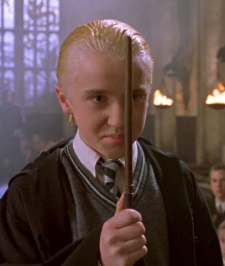 As we know expanded noun phrases simply include a noun and at least one adjective.

In year 5 however, we'd expect a little more... it's all about the vocabulary!

Here's my first example: Malfoy had white blond hair. This is an expanded noun phrase but it's not the greatest.

This would be better: Malfoy had slicked back, white blond hair which he wore like a crown.

The little wizard was incredibly arrogant. I think I could uplevel the word arrogant and replace it with the word egotistical and give a reason why Malfoy might be arrogant.

The little wizard was incredibly egotistical as his dad was a pure blooded wizard who held a lot of power within the community.

The little wizard enjoyed nothing more than a competitive game of Quidditch.

Have a go at describing your character's appearance, personality and hobbies using expanded noun phrases.